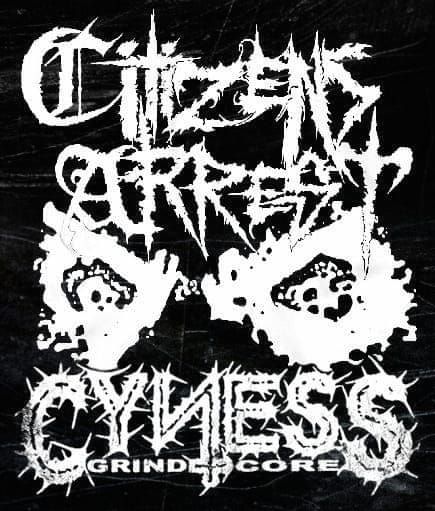 CITIZENS ARREST is a New York-based band that existed from 1989 to 1991 and reformed in 2010. The group often blended Hardcore Punk, Grindcore and Powerviolence styles.

Their main inspiration in the early days of the band were from Boston area hardcore from the 1980s like DYS and SSD. They also derived influence from early Powerviolence pioneers INFEST.

The demo tape was released in early 1989 and featured Ted Leo on vocals and future vocalist Daryl Kahan on drums. The demo tape showed the most direct linkage to Boston area hardcore sound from the 1980s. “Serve and Protect” is arguably their most recognized song to date. It also featured the song “Start Again” which was of a more melodic and emotional sound then they would do in future efforts. They did not play this song often in live shows unless Leo was available to attend. Leo departed shortly after the demo release to attend college at Notre Dame. This initiated the move of Kahan to vocals. In search of a replacement drummer, Kahan turned to friend Patrick Winter who had played in his previous band True Colors. The timing of this move was perfect as well since Winter’s current band, Our Gang had broken up the previous month.

The first release by the band, “A Light in the Darkness”, a 6-song EP showed their most direct and raw hardcore approach. This was most apparent by the switch to Kahan’s guttural vocal style. Showing a range of melodic high screams and deep tonal growls that became an essential, identifiable part of their sound. Winter brought a hard-hitting straightforward hardcore style to the drums. Janis Chakars guitar seemed more distorted and raw than on the demo release. This was also helped by the production of Don Fury, who had recorded countless hardcore releases and was known for bringing the best energy out of bands during that era. Joseph Martin’s pickless bass style served as the pulsating backbone to the rhythm section. The cover of the EP featured a painting by Caspar David Friedrich “Monastery Graveyard in the Snow”. They would continue to use classic art as design elements in future releases. During the same time as the EP release, the band released two notable tracks, “Death Threat” and “I Won’t Allow” on a compilation record “Look at all the Children Now”. This record contained the work of many great bands from the ABC No Rio hardcore scene. This EP is commonly regarded to as one of the best hardcore records of the era.
https://www.facebook.com/profile.php?id=100053175281601